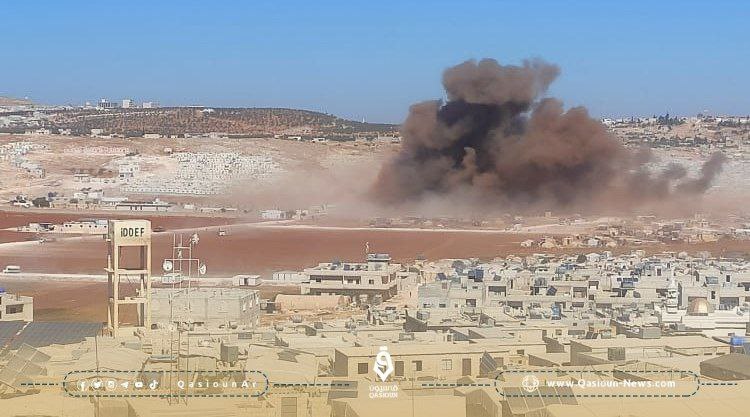 A number of civilians were wounded in air strikes by Russian warplanes, on camps in the northern countryside of Idlib, near the Bab al-Hawa border crossing with Turkey, today, Tuesday, September 27.

"Qasioun TV" reporter stated that Russian warplanes launched four air raids with vacuum missiles, targeting the vicinity of the camps for the displaced near the town of Kalabid in the northern countryside of Idlib.

Our correspondent explained that as a preliminary result, the raids left 8 civilians wounded, including a woman, seriously wounded, in addition to material losses to their property.

He pointed out that the civil defense teams went to the site of the attacks, secured it, and transferred the wounded to the local hospital to receive the necessary treatment.

According to the Syrian Observatory for Human Rights, seven Syrian civilians, including four brothers, died as a result of Russian bombing of Jisr al-Shughur camp, west of Idlib, last August.

The Russian bombing comes today, as Iran and Russia renewed, on July 19, their "determination to continue working together to eliminate terrorists" in Syria, according to a joint statement by the leaders of the three countries at the summit meeting in the Iranian capital, Tehran, on various issues, foremost of which is Syria.