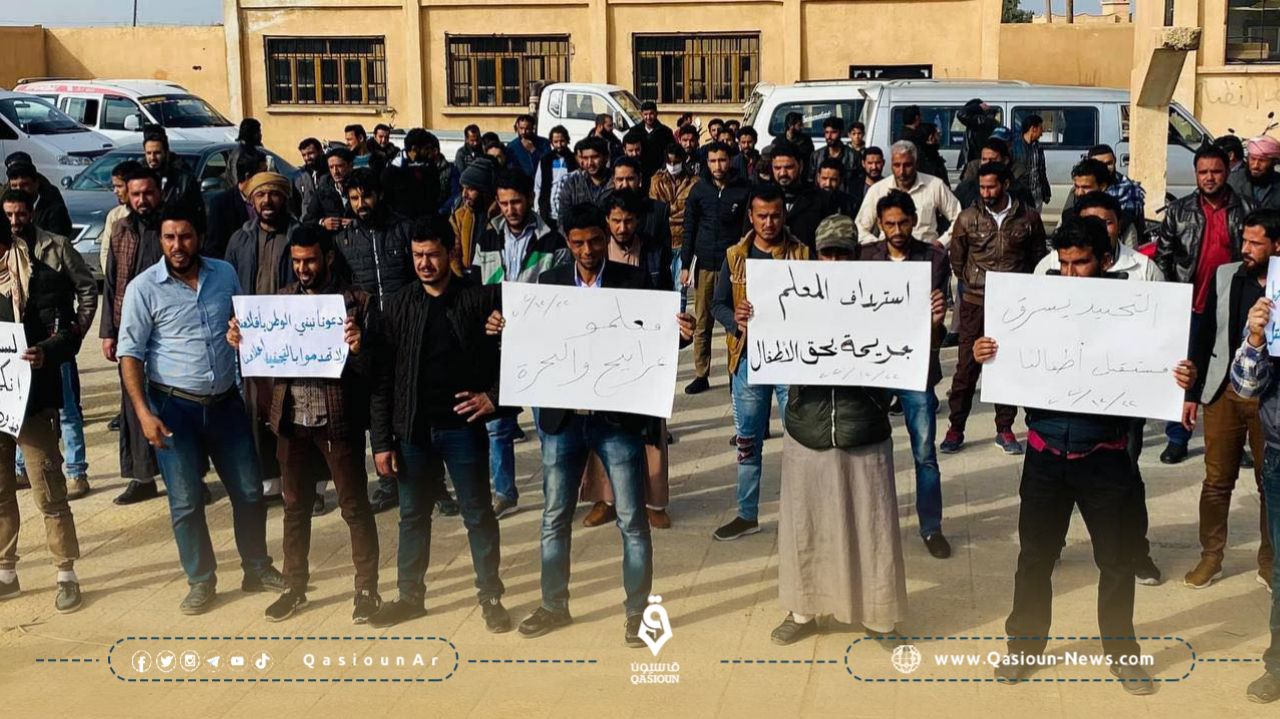 The vigils of teachers continue in the areas of northeastern Syria, rejecting the school curricula that the Syrian Democratic Forces are trying to impose by force.

According to local sources, the teachers of Theban Educational Complex issued a statement on Sunday, confirming their complete rejection of the curricula that SDF is trying to impose on them.

The teachers confirmed their support for the rest of Deir ez-Zor regions, which came out a few days ago to demand the cessation of distributing SDF books and curricula, in addition to a number of other demands.

In a remarkable development in this regard, a number of tribal sheikhs and tribal dignitaries in the countryside of Deir ez-Zor issued a statement in which they affirmed their full support for the teachers' demands and their refusal to teach self-administration curricula to children in order to mislead and prejudice them in religious sanctities.

The statement issued by the Al-Baqara tribe, the largest Syrian clan in the countryside of Deir ez-Zor, regarding the rejection of the SDF curricula said: “We are the sons of the Al-Bamara Hashemite clan, represented by all that includes sons, dignitaries and sheikhs, headed by Sheikh Hajim Al-Bashir, the sheikh of the Hashemite Al-Baqara tribe, we declare our rejection of any prejudice to our beliefs and religion. We join our voice with that of teachers who reject self-administration of the curricula, because it contradicts our religion, principles and beliefs.

The statement continued: "We seek with all our stability in our region and our country and stand in the face of all attempts to destabilize, but this should not be at the expense of the principles of our religion, our history and our customs." Tradition, history is cruel."

The sources said that the teachers of the towns of "Al-Keshkiya" and "Abu Hamam" staged a sit-in this morning, Thursday, inside the Al-Furat Educational Complex, to express their rejection of the curricula imposed by the Autonomous Administration of the "SDF" forces in northeastern Syria.

Parents refrained from sending their children to schools because of the curricula imposed on them, and demanded to stop distributing "unrecognized" books and curricula to the governorate's schools. Teachers appealed to UNICEF to urgently intervene.

The teachers demanded an immediate increase in their salaries and link them to the dollar exchange rates. They also demanded that the salaries of maternity contracts be paid to teachers during the past year.

They also called for the appointment of guards for schools and educational complexes to reduce the recurring thefts in the rest of the schools in the Qamishli and Al-Hasakah regions.

It is noteworthy that the teachers’ vigils expanded to include several new areas in the countryside of Deir ez-Zor, in addition to the towns of al-Shaddadi and Markada, the surrounding villages south of Hasaka, and a number of schools in Deir ez-Zor governorate. Tabqa city, west of Raqqa