Sources: The regime and Iran are the most prominent suspects and beneficiaries of the bombing of the overnight bus in Damascus 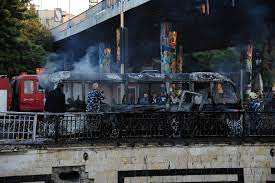 Jusoor for Studies Center confirmed that the Syrian regime is the "first suspect" in the explosion that targeted a military bus in central Damascus, killing 14 people and wounding others.

In a report, the Center suggested that the regime is the “first suspect” in carrying out the bombing, whether to get rid of a person or group with competitive motives over security or economic interests, or to mix papers and investment in a state of chaos, in anticipation of any expected US-Russian-Israeli understandings that do not lead to favor of the regime and Iran.

It added, according to Al-Sharq Syria website, that the bombing helps reinforce the regime's narrative that it is fighting a battle against "terrorism", and also sends a message to its allies that it is able to mix all the cards and arrangements they make if its interests are not taken into account.

It pointed out that this motive also applies to Iran, which does not like Russia's end to the manifestations of Iranian militia chaos, and the transition to political arrangements and reconstruction, and does not serve its interests.

It believed that "the possibilities are open for the regime to have a hand in this bombing, directly or indirectly," but it is certain that the regime is rushing to exploit the matter and invest in it internally and externally.

In addition to the regime and Iran, the report pointed out that there are many actors who could stand behind such an explosion, most notably ISIS cells.