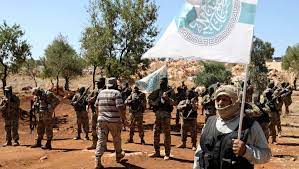 Local sources reported that the military leader of "Hay'at Tahrir al-Sham" Abu Muslim al-Shami made new statements, Wednesday, in which he vowed to respond to the massacres of Al-Assad regime in Ariha and Sarmada.

Al-Shami said: According to what the opposition Al-Durar Al-Shamiya network monitored, "the factions of "Al-Fateh Al-Mubeen Operations" room, headed by "Hay'at Tahrir Al-Sham" and the rest of the factions are spread on all the fronts of the liberated areas and are working to watch the entire front line with the enemy."

Al-Shami stressed that the work of fortification, building, graduating regiments of fighters and qualifying them to defend the liberated areas is still continuing through specialized military courses in various military categories and specializations.

He added: The crimes of the regime and its militias that targeted our civilians in the cities of Sarmada, Ariha and others through artillery and missile shelling and killing innocent children, will have a deterrent effect, God willing.

And he added: "The military factions have reached an advanced stage in military preparation and planning, and today they are stronger than ever, and we as revolutionary factions and our people in the liberated areas have a fair cause, our goal is to liberate our land and restore our dignity, so we continue to resist this brutal regime until our people return to their areas, and they are the most honorable.”