By names... 4 officers of the regime forces, including a colonel, were killed in Damascus, Latakia and Idlib 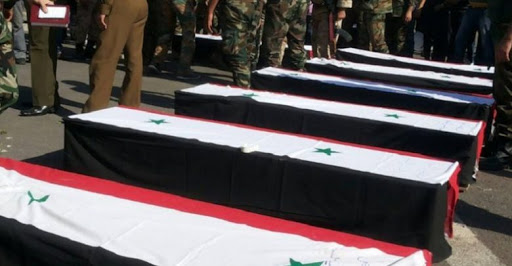 Local news websites reported killing 4 officers, including a brigadier general and 3 others with the rank of first lieutenant, in a variety of circumstances, between a traffic accident in Damascus, a heart attack in Latakia, and direct targeting in the desert and Idlib.

Sham News Network indicated that it monitored the mourning of pages loyal to Al-Assad regime, killing an officer with the rank of colonel named "Ahmed Khader Shahoud".

It said that he was killed in a traffic accident with his wife and son, and a picture of his car was broadcast on "Homs - Damascus" road near Qara area in Damascus countryside.

Meanwhile, the officer with the rank of first lieutenant "Abboud Ali Youssef", from the coastal village of Al-Burjan in Al-Tanf desert, was killed amid conflict with other reports that indicated his death in Al-Bukamal, east of Deir Ezzor.

In a related context, Lieutenant Sobh Muhammad Abboud, from Al-Mashtia village, in Jableh district in Latakia governorate, was killed "after a heart attack while performing his duty in Latakia countryside", according to the description of pages close to Al-Assad regime.

Also, his counterpart, "Ahmed Abdo Haqq", who came from Yabroud area in Al-Qalamoun in Damascus countryside, was killed by the rebel factions in the southern countryside of Idlib, northwest Syria.

It is noteworthy that the regime’s militias suffer frequent deaths and injuries, including officers and military leaders, most notably on Idlib, Aleppo and Latakia fronts.

In addition to the attacks and explosions that affect military sites and columns throughout the Syrian desert.