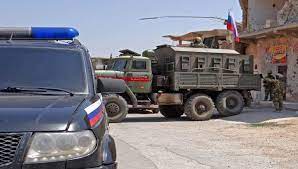 Local sources confirmed that military forces, accompanied by the Russian police, were deployed inside residential neighborhoods in Al-Yadouda town in the western countryside of Daraa governorate.

"Daraa 24" network said that the regime forces searched a number of houses in the town, in implementation of the agreement made between the notables and the central committees on the one hand, and the officers of the Security Committee in Daraa city on the other hand, under Russian auspices.

According to the network, among the houses that these forces affiliated with the army and security forces entered, were three houses belonging to three former local fighters who joined the Fourth Division after 2018, and they searched their homes, and took two of them to settle and hand over their weapons, and the third was leaving towards Lebanese territory. a while ago.

It is noteworthy that the regime forces opened yesterday, Monday, a settlement center in a school, after reaching an agreement concluded by the Security Committee with the central committees in the western region, under Russian auspices.