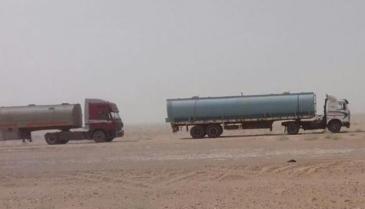 On Saturday, the organization's "Amaq" agency published a statement in closed groups via the Telegram application, in which it stated that the organization's cells targeted, with automatic weapons, an oil tanker belonging to "Qaterji" militia on Al-Manakher road east of the town of Al-Karamah in the countryside of Al-Raqqa.

This targeting came during the departure of 135 Qatirji oil trucks to Al-Assad regime-controlled areas through Al-Tabqa crossing in the western countryside of Al-Raqqa, after they filled their tanks with crude oil from Rmelan oil fields in Al-Hasaka countryside, which are under the control of "SDF" and supervised by the International Coalition.

And private sources told Syria TV website yesterday that dozens of trucks left "Al-Buassi" crossing, west of Al-Tabqa, on Al-Raqqa-Aleppo road, to the regime-controlled areas, coming from Rmelan fields through "Abyad" road that connects between Al-Raqqa and Al-Hasakah.

It added that this convoy is the first during the month of July, and Rmelan fields in Al-Hasaka countryside are the main source of crude oil for the regime.