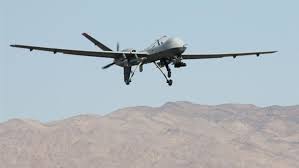 The regime's "SANA" news agency said, "An American drone targeted a truck transporting foodstuff in the town of Al-Suway'iyah, affiliated to the city of Al-Bukamal in the southeastern countryside of Deir Ezzor, which led to the destruction of the vehicle without causing any human casualties."

For its part, the pro-regime radio "Sham FM" said that the strike resulted in the death of the truck driver, without giving any other details.

Meanwhile, local media networks, such as “Nahr Media” network, said that the strike targeted a truck of Iranian militias loaded with ammunition and weapons.

Meanwhile, “Furat Post” network said that an unidentified aircraft targeted a truck loaded with ammunition and weapons belonging to the Iranian Revolutionary Guard near the snow factory on the Al-Bukamal-Al-Hari road, east of Deir Ezzor.

Radio Al-Kul sources indicated that preliminary information indicates that there are casualties from the Iraqi Popular Mobilization Forces, affiliated with the Revolutionary Guards