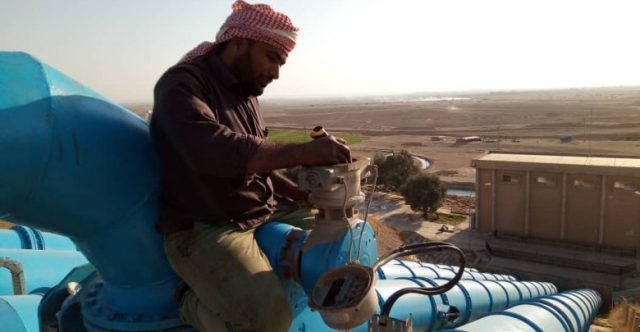 Yesterday, Saturday, unknown persons targeted, with an explosive device, the water station of Bir al-Hashem village, northwest of Al-Raqqa, which led to it being out of service and depriving dozens of villages of water, local sources reported.

Radio Al-Kul website stated that unknown persons detonated an explosive device inside the station, causing damages in the control panel and destroying parts of the station that were completely out of service, without recording human losses.

The source added that the station feeds more than 100,000 dunums of agricultural land northwest of Al-Raqqa city, in addition to supplying tens of villages with drinking water.

For his part, "North Press" website, which is close to SDF, quoted "Ismail Muhammad," one of the maintenance workers, as saying: The maintenance work of the control panel is underway, with expectations that it will be completed within the next 48 hours.

It is noteworthy that the Syrian Democratic Forces have accused ISIS of being behind this bombing, while the people rule out that ISIS will carry out this action because it has never blew up water stations before in Al-Raqqa and elsewhere, but its bombings and targeting were limited to the headquarters, patrols and elements of the Kurdish units.