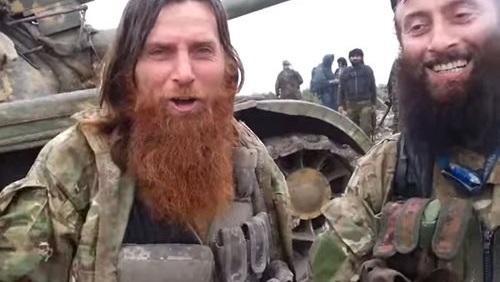 Local sources reported that the members of "Jund al-Sham" faction, Chechens make up its body, have evacuated their military positions in opposition-controlled areas in the countryside of Latakia governorate, under pressure from "Hay'at Tahrir al-Sham", which controls large areas in northwestern Syria.

Al-Monitor, on Thursday, quoted well-informed sources as saying that Jund al-Sham fighters left their weapons and military positions in Latakia Mountains, and headed with their families to live in Jisr al-Shughur countryside in response to demands of Hay'at Tahrir al-Sham.

A leader close to Jund al-Sham, Abu Khaled al-Muhajir, explained that the faction "has not completely dissolved itself, but it no longer has a presence in the field," adding that the group "will issue an official announcement within a few days, and its fighters will remain as individuals fighting the regime, and they will not be able to Go to their countries of origin because they are wanted by the security services there."

A leader in "Tahrir al-Sham" told Al-Monitor, who preferred not to be named, that "the organization is establishing a state, and it will not allow any group to operate independently of it."

Commenting on the issue, Abbas Sharifa, a researcher in the affairs of jihadist groups at Jusoor Center for Studies, said that HTS “is trying to redraw the jihadist scene with Syrian citizens only, and it wants to show external parties that it is fighting and eliminating jihadist groups in Idlib, and that it is committed with international agreements.

Sharifa indicated, according to the Syria TV website, that "some members of the faction may go to areas under the control of the Turkish-backed National Army, but they will not join the body for ideological reasons."