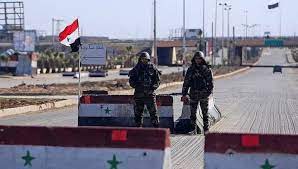 The local "Ain al-Furat" network said that the number of confiscated cars amounted to 28 civilian cars, which the regime forces transferred to the National Defense headquarters in the town of Dibsi Afnan in the countryside of Al-Raqqa.

It is noteworthy that the regime forces use these cars for military mobilization in favor of their forces and police forces in the countryside of Al-Raqqa, and this campaign of confiscation paralyzed traffic on Al-Raqqa-Aleppo highway.