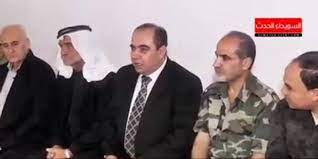 The local "Suwayda 24" network reported that Azzam was seriously injured, with "a broken nose and head and body wounds" after resisting the kidnappers, who stole his car after they failed to kidnap him.

The network quoted Azzam as saying that three cars and three motorbikes followed him after midnight, while he was returning to his home, when he arrived in front of the house, they took him out of the car and put him in its trunk in an attempt to kidnap him, but he resisted and managed to escape with the help of neighbors.

The network added that the kidnapping attempt came after many kidnapping threats that Azzam received from one of the kidnapping gangs deployed in the governorate, describing that gang as professional, after following up, chasing and cutting off the road he was exposed to.

It is noteworthy that Azzam is a traveler and is considered one of the organizers of events and festivals supporting Al-Assad.

In his latest work, he signed yesterday the book “Paris is an Arab Capital”, which is translated by Azzam, written by the French writer “Nicolas Beau” and signed at the Cultural Center in As-Suwayda in the presence of leaders from Al-Baath Party in As-Suwayda.