The regime escalates its bombardment on Idlib, causing civilian casualties 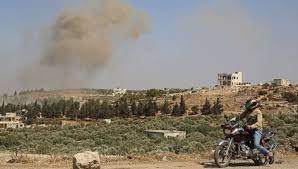 Local sources reported that 8 civilians were killed this morning, Thursday, in a new escalation by Al-Assad regime on the countryside of Idlib and Aleppo, northwest Syria.

The sources said that Al-Assad's forces targeted with artillery shells and rocket launchers the town of Al-Foua in Idlib countryside, which led to the rise of 5 civilians, who were evacuated by the Civil Defense in the area.

Meanwhile, 3 civilians from one family were killed and others were injured as Al-Assad's forces bombed the town of Iblin in Jabal al-Zawiya, south of Idlib, according to "Al-Durar Al-Shamiya".

Al-Assad forces also bombed with heavy artillery the town of "Al-Jina" in the western countryside of Aleppo, which led to civilian casualties and material damage.

Hmeimat village in the western Hama countryside was also subjected to heavy shelling by Al-Assad forces with heavy artillery and rocket launchers.