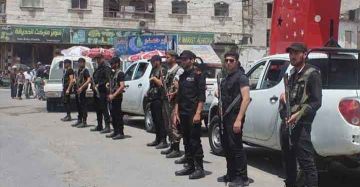 Local sources confirmed that the police and General National Security forces in Al-Bab city, east of Aleppo, on Tuesday, arrested an ISIS cell that included a number of people, including women.

Radio Al-Kul in the countryside of Aleppo said that the cell consists of 8 people, including two women, noting that violent clashes took place between the two parties prior to their arrest, which resulted in injury a member of the police force.

A private security source in the city, according to Radio Al-Kul, clarified (refused to give his name) that the cell is responsible for many assassinations that have recently affected a number of members of the police forces and the national army.