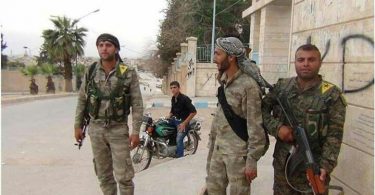 Media sources reported that the Iranian Revolutionary Guards militia began transporting weapons and ammunition to civilian homes, which it seized a few days ago, within residential neighborhoods in Al-Mayadin, east of Deir Ezzor.

According to what was reported by the Syrian event website, the Revolutionary Guards forces in the western Euphrates region, and during the past hours, transferred a quantity of weapons and ammunition from their storage places in the farms area on the outskirts of the fields to houses within populated neighborhoods, amid the civilians’ fear of taking them as human shields.

The source added that the transfer process focused on the seized houses in "Street 16" area of the city.

He pointed out that these moves came days after the seizure of 14 houses on Al-Arbaeen Street, 12 houses in 16th Street, and 8 houses in Al-Maharim neighborhood.

The sources pointed out that all the houses belong to opponents of the Syrian regime who are outside the area.

It is noteworthy that the pro-Iranian militias rearranged their ranks and spread again in eastern Syria between Al-Mayadin and Al-Bukamal areas late last month, in the wake of the American strikes that affected them.