Turkish Interior Minister: Announces the completion construction of 35,000 homes for Syrians in Idlib 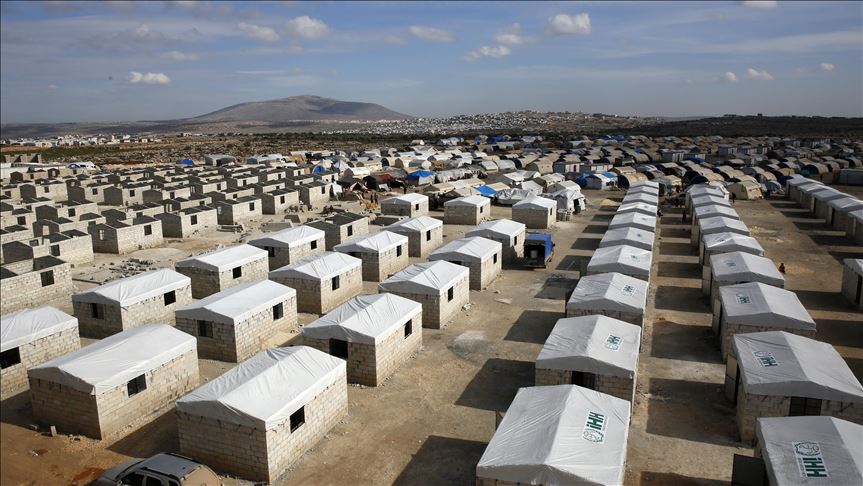 On Thursday, Turkish Interior Minister Suleiman Soylu made a visit to the Syrian governorate of Idlib, during it he inspected the construction of temporary homes from bricks, confirming that 35,000 units had been completed within one year.

During the visit, Soylu inspected with a number of officials the construction works supervised by the Turkish Disaster and Emergency Management "AFAD" in 3 sites.

The minister listened to the problems of the Syrians living in the tents, and congratulated them on the blessed Eid al-Fitr.

He also distributed gifts to children, and conveyed the greetings of President Recep Tayyip Erdogan to Syrian families.

In a statement to the Anadolu Agency correspondent during his inspection tour, Soylu confirmed that "AFAD" and civil society organizations have provided large humanitarian aid in the region with instructions by Erdogan.

He indicated that construction work is still continuing, stressing that 35,000 temporary brick homes have been completed in Idlib Governorate in a year.

He pointed that the number will reach 51,000 homes by next July.

He also announced starting infrastructure work for 7,500 homes in another new site.

During the last years, millions of civilians have been displaced, after the Syrian regime bombed their cities, to areas close to the Turkish-Syrian border in Idlib, where hundreds of thousands of families were forced to live in tents after they were unable to secure homes to shelter them.

Since the crisis outbroke in Syria in 2011, Turkish organizations, institutions and associations have continued to provide aid to needy Syrian families, such as the Disaster and Emergency Management "AFAD", the Red Crescent, the Humanitarian Relief Organization "İHH", and "Sadaqa Tashi", and others.