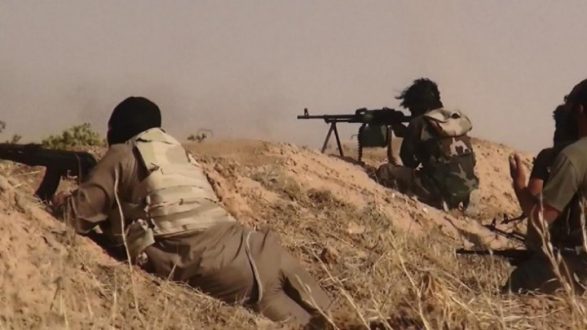 ISIS cells renewed their attacks in the areas controlled by the Syrian Democratic Forces in Deir Ezzor countryside.

According to "Watan FM" website, after midnight on Tuesday, May 11, ISIS fired a civilian on charges of practicing withchcraft and sorcery in Al-Hussan village in the western countryside of Deir Ezzor, killing him instantly.

The website added that unidentified gunmen, likely from ISIS, blew up the emergency building that SDF was using as its headquarters in the city of Al-Busaira, east of Deir Al-Zour, noting that SDF withdrew from it two months ago.

A member of SDF was killed, on Monday, May 10, when unknown assailants were riding a motorcycle in Bssiteen village in the northern countryside of Deir Ezzor.

In addition, an explosive device exploded in a car of SDF in Al-Shuhail town, east of Deir Ezzor, without causing any losses.

It is mentioned that unidentified gunmen on a motorcycle targeted, on Sunday, May 9th, a bus loaded with members of SDF in Al-Kibar village in the western countryside of Deir Ezzor, and our reporter added that the targeting resulted ed to kill and wound six members of the Syrian Democratic Forces as a preliminary outcome.

ISIS cells are deployed in the northern and eastern desert of Deir Ezzor, where they are working to target members of the Syrian Democratic Forces and those who accuse them of being associated with it.