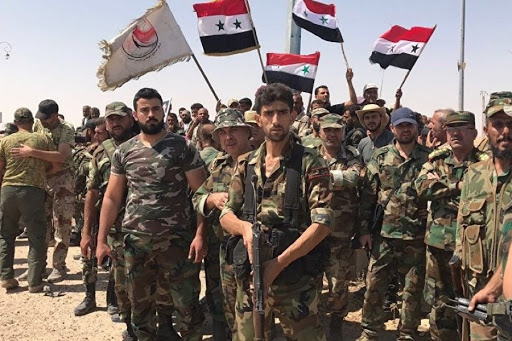 The commander of "National Defense" militia in Hasaka and a member of the regime’s parliament, Hassan al-Salumi, vowed to regain control of the Tayy neighborhood, which has come under the almost complete control of the Asayiş forces, after days of clashes between the two sides.

by a video shared by social media activists “Al-Salumi” is appeared in the midst of a groupe of people, promising to regain control of “Tay” neighborhood in Qamishli city from the hands of the "Asayiş", and he repeated the phrases: "There is no dignity, there is no honor, if this neighborhood did not return even if we gave all our souls”.

According to sources, this coincided with reports that the "National Defense" militia had mobilized its forces in the last part under its control, and raised earth mounds and immunization, and the arrival of weapons and quality equipment to regime elements, including shoulder-fired rockets.

For its part, the Syrian Democratic Forces' military media said that the "National Defense" militia is taking advantage of the truce and mobilizing its forces in “Tay” neighborhood in Qamishli.

Qamishli city is in a state of calm after the "Asayiş" fully took control of "Tay" neighborhood, waiting a final ceasefire agreement between the two parties.