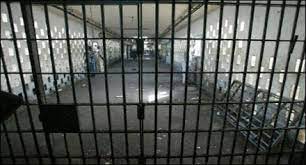 The defector officer and one of the survivors of the regime's prisons, Colonel “Haytham Khattab”, exposed the tough torture methods used by Al-Assad regime against the officers who defected from its forces, and the methods of making them confessing in Sednaya prison, or what is known as the “human slaughterhouse”

Khattab pointed that he was arrested with about 85 officers and transferred to Sednaya prison at the end of 2011, and there he spent the worst days of his life.

In a video interview with Arab 24 agency, he says that he and his fellow officers spent more than 20 days in solitary confinement at the start of their transfer to Sednaya prison.

The defector colonel spoke, according to what was reported by the opposition Orient Net website, about various methods of torture, and Colonel Khattab mentioned that the most terrifying methods of torture they used with them was an iron bar or a blood bar, that they beat them on their stomachs with an iron bar until the blood came out from the belly.

They used to leave the beaten officer days and months and no one treats him, and no one ask about him until he died, he also says: Many death accidents have become because of beating.

Khattab pointed that one of the worest and dirtiest moments was when he witnessed death of two officers under torture, the first was a captain and a military judge and he was from Nasib , and the second was an officer from Hama countryside named Lieutenant Colonel Muhammad al-Hakim.

They enter him into death room, he came out collapsed, he was struck by a kind of hysteria, and after three or four days he died.

And about the moment of his release from prison, the colonel and former leader of the Free Army said: The moment of release was indescribable, it was a real second life in every sense of the word, I was released from the prison of death.