One of them is a general, 4 regime officers were killed in mysterious circumstances 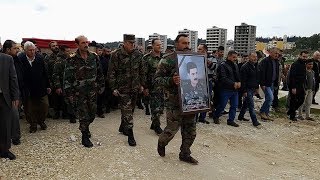 Opposition news websites said that an officer in Syrian regime forces, with the rank major General, called "Riad Ahmed Shihab", was killed in Lattakia in mysterious circumstances. The sources pointed that "Shihab" was previously a director of the military hospital in Lattakia.

Pro-sources to the regime claimed that "Shihab" died because of his infection with Corona virus, without any additional details on this topic.

In the same context, the sources said, according to the "sy 24" website, about killing 3 officers of the Syrian regime, they are the first lieutenant, called "Muhammad Ibrahim Salman” who comes from the countryside of Tartous, and Lieutenant Sharaf, called “Ali Fuad Ghanem,” who is from Jabla, and First Lieutenant, “Sumer Saeed Murshid,” who comes from Qerdaha.

According to the website stories varied about their deaths, some of them said they killed by unknown persons, some said that a checkpoint was targeted for them in Jabal al-Akrad area by the opposition factions, which led to kill them, while the Pro-sources did not pointed to details about their deaths and only published epithets about some of them.