Tahrir al-Sham breaks into a town and kills wanted people 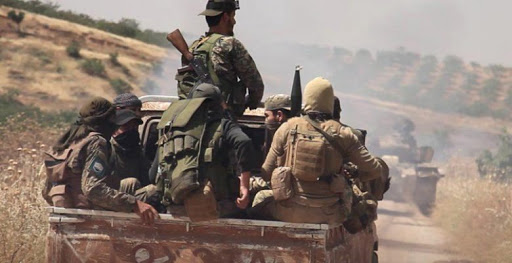 Yesterday, Monday evening, members of the General Security Agency of Tahrir al-Sham for breaks into the town of Kafr Dayan in the northern countryside of Idlib.

"Jisr" newspaper, quoting local sources, said that yesterday, patrols from the Public Security Agency breaks into the town of "Kafr Daryan", west of Sarmada, in the northern countryside of Idlib, with the aim of arresting people who are wanted by it.

The sources indicated that Al-Hay’a aimed, by breaking out the town, to arrest immigrants belonging to radical factions, one of them called “Abu Dujana al-Libi” and another from Tunisia, but the wanted persons resisted the security forces and clashed with them, which led to killing them.

The sources added that the two dead men are wanted to Al-Hay’a , and they are also wanted by the International Alliance, according to the sources.

It is mentioned that Hay’at Tahrir al-Sham accuses extremist jihadist elements of targeting its leaders and members and inciting to fight against it, which led to clashes between these elements and the security forces of Tahrir al-Sham more than once.